No excuses.  I wish I had the inclination to blog more regularly but it hasn't happened.  In my head I write but it never gets to the computer.

Covid is still out there.  But we have eased up a little bit.  Dumb, maybe, but we're still being careful.

Casey started swimming at the Rehab Gym a couple of weeks ago.  He was nervous, probably because of Covid and also because he just gets anxious about going places.  He really enjoyed it.  He's been twice now, and each time he has said, "Swimming again tomorrow."  Sorry Casey but twice a month is enough for me!  It's a lot of work from the house to van to pool to van to house to shower to table.  But it's worth it.  I know his therapist gets some good stretching in and he doesn't complain at all.  He also must be excited to see other people besides family and his nurses :)  Britni tells him stories about her kids and he likes that.

Wow.  Can I be any more boring?

Last evening we went out to see the Milton Light Parade. Last year they went right by the house.  This year the route was different but close enough to walk to see. We thought we had it timed right but, ooops, we were halfway down our street when it went by on Route 7. So we backtracked as fast as we could go to catch them on their way back around a neighborhood loop. We went as quickly as could be with me leading the way with my sore leg and a lantern. Then came Nurse Julie with Casey with his flashing light up scarf and hat and sleigh bells. Last was Gene and Molly. Molly had on her orange harness and flashing doggie light. Gene wore his dad’s safety vest (his dad was a crossing guard),a hat with a led light and some flash lights. We were quite the sight!

We got to our spot. Didn’t have to wait too long. A policeman was stopping traffic te the line of cars to make it back out to Route 7 so we had a good view. I’m adding the video but they were so much more spectacular in person. Casey wants Dad to put light on our van next year so we can be in the parade.

We’re so happy we got to have this little bit of holiday tradition especially since we didn’t go to the town tree lighting this year.  It was fun!

PS  Molly was a super good girl  it’s funny, when we put the harness on her she gets really docile and cooperative which is a good thing when we are out on a walk in the dark in a busy street! 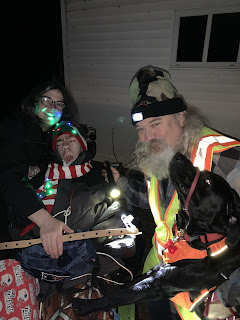 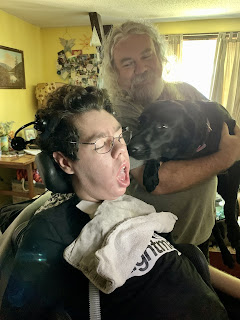 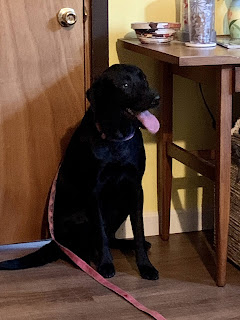 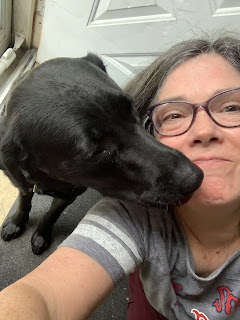 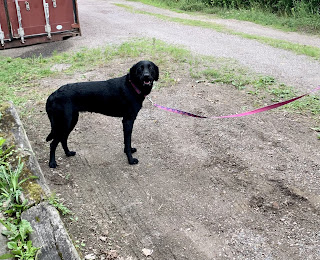 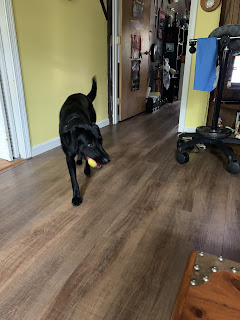 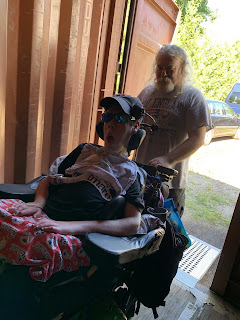 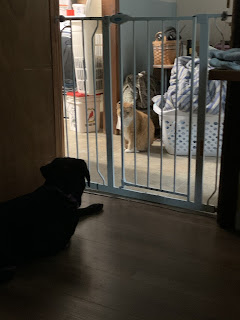 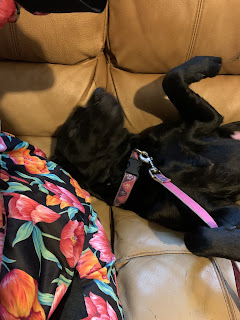 Two big updates:We adopted a female black lab!  She's about 15 months old.  We got her off Craigslist.  I know, I know.  But it worked out.  She's a good girl, for the most part.  Biggest issue is that she's a runner. Twice within the first couple of days we had her she got loose and took off.  Poor Gene almost had a heart attack.  But he got her back.  The best thing about her is that she is not timid with Casey, his medical equipment, nor his chair!  That's always a worry.  She just took it all in stride.  She's also very, very sweet and pretty.  She's much smaller than Jaxon was.  We weighed her here and she was about 53 1/2 pounds.

The second thing is that our renovation has begun!  The crew came on Tuesday, the 13th with the contractors and they made a plan (for what it's worth).  They started actual demo on Wednesday, the 14th.  So far they haven't touched the upstairs bathroom so we can use that, thankfully.  The kitchen is GONE!  The living room is gone!  Right this minute the entryway floor is still there and they haven't touched the laundry area.  Tonight we have to get the rest of the things out of the entryway as the floor will be worked on tomorrow.

Oh, the the electrician is here.  I'm not sure what they are doing but I hope progress is being made.  Plumbing and electric are going to be HUGE.  Hopefully they built enough into the contract to cover what needs to be done.  We are already adding to the cost as there some sill rot and some other things that need to be fixed that I don't even understand.

Casey had a pulmonary and an ENT appointments yesterday.  Pulmonary was fine.  Pretty much a check in and a catch up.  Dr. Cowan will talk to Janet about trying the Astral vent and also maybe the Shiley trach that they just re-designed.  ENT sucked out his ears.  She thought they were a little damp.  MAY eventually try some powder to get the flora to be more normal.  We talked about the supragranuloma (not sure if this is the proper name) that Dr. Lahiri found when he did Casey's bronch a month or so ago.  She thought it would be a good idea to remove it.  It's above his trach so it's not affecting his breathing or trach right now.  But who knows if it will grow more.  And, if for some reason we couldn't get his trach in, the granuloma would block an intubation tube.  So we probably will do it but not not super soon.  It entails the whole nine yards: fasting, IV, sedation, surgery, and recovery.  Ugh. She thought his trach site looked good.  Casey was pretty cooperative overall.

Some funnies about the trip to UVM.  We had to bring Molly with us as she's still too new and nervous to leave here alone.  So Gene dropped Nurse Staci, Casey and I off and they went on adventures.  Molly got to pee all over Burlington!  She loves riding and was mostly cooperative.

Dr. Cowan had a resident with her.  First thing he says to the resident. "Korean".  The resident said, "You got me"  :)  He was a good sport and put up with Casey's questionings.  Of course Casey wanted to know his wife's name (not married), children (none), address (Burlington).  Etc.

New laptop for me!

It came today!  Kinda a late Mother's Day gift to me.  My HP laptop was about 7 years old and stuck on Windows 7.  It wasn't really bad, but I definitely could use an update.  Definitely could use an refresh. Gene found a Lenovo at Costco for about $500.  Set it up, mostly, but some things are weird and it will take a bit for me to figure them out.

I hope to be able to use our printer easier than it was with my old laptop.  Not sure why it was a pain.

Used the new laptop for Reading Group today and Karen said we looked a little sharper and she could hear us well.  So that's good. 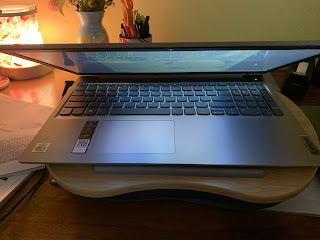 Long story but I cancelled the bronch for Casey.  When the pre-op people called they told us to be there at 6:30AM!  I thought something had changed.  No one could tell me what the actual time of his procedure was.  Come to find out, there really isn't a time set.  Its first case, second case, etc.  But, when the pulmonary nurse called on Monday morning to check what was up, she said to just ignore what the pre-op people said, sigh.  I wish I had known.  When I tried to find out what was up, on Saturday morning-because no one called me back from pulmonary on Friday, I was sent all over the hospital but no one knew anything.  I don't know why I never thought to ask to have the on call pedi pulmonary doc paged.  We're pretty self sufficient and haven't needed things after hours very often so it didn't even cross my mind.

Anyway, he is scheduled for Monday the 24th and we're to be there at 7:30 AM.  That's early enough for me!  We're way out of practice in getting ready early.  So crazy to remember that we used to have Casey ready by 7:00 AM certain days of the week his last few years of school.  (some days were later).

Casey has to get another Covid test done.  The same service will come here.  The nurse I spoke with at pulmonary said they had no problems getting into the van to test him but when they called to set him up, they said NO WAY so they have the service coming again Friday at 10 AM.

Welcome to Our Home:

(for blogging, that is!)

Welcome to the O'Neill Boys' permanent home on Blogger. You can view our past years at our Live Journal pages.